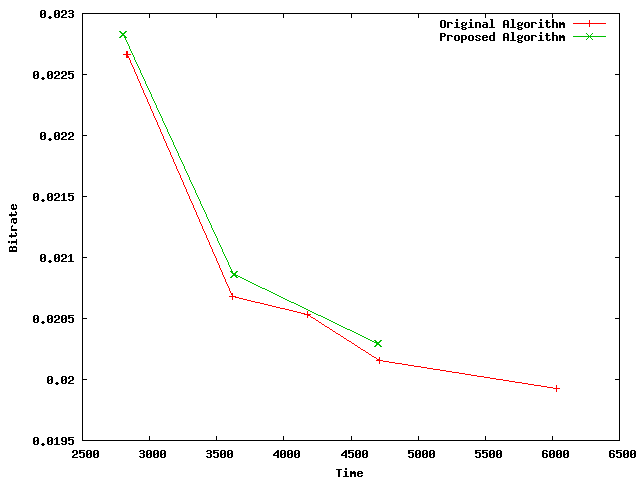 I have explored three fast reference search approaches this week. Each method uses a different metric for signaling early termination. The first method uses a moving average of the cost of the best ref to predict a low cost point of termination. The second method sorts the references in order of the p16x16 cost and only searches the lowest cost references. The third method is similar to the first except it maintains a moving average of the slope between the references to signal termination.

The first method, moving average, relies on the tendency of the best ref to be ref-0. Many sources have been examined (touhou,300,pirates) and on average 70% of the time the best reference frame is ref-0. This means that 70% of the time it is pointless to search the remaining references. To exploit this tendency a moving average is computed for all searched blocks where the best ref is ref-0. Every 10,000 blocks the average is updated with the cost of a best ref-0. When the average is not being updated the search will be terminated if the cost of ref-0 is within 3 standard deviations of the average.

The second method, sorts, attempts to rank each ref by its p16x16 cost prior to searching. Once the refs are sorted there are a number of ways to determine which refs are likely to be the best choices. One is to only search the best 2 or 3 refs which results in a fairly high cost increase. Another can be to search only refs within a certain cost percentage of the best ref. However, this depends on some magic percentage which may change from source to source. Depending on the percentage this can result in fast and costly or slow and accurate encoding.