Transcoding is the process of taking a media file or stream and converting it to a different format or bitrate. There are two methods for transcoding in VLC, via the GUI (VLC's default interface) or via the commandline. The term transcode by itself normally refers to converting one media format to another and saving the output to a file (i.e. no streaming involved).

If the profile settings were compatible and transcoding was sucessful a playable destination file should be created. 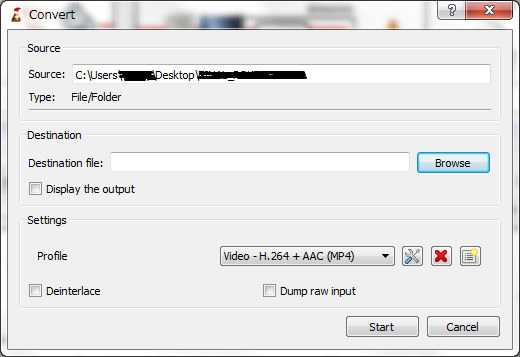 On Windows-based system Command Prompt can be used. This can be found in the "Accessories" folder of the Start menu. Alternatively by going to "Start >> Run..." or pressing "Windows key + R", entering "cmd" into the text field and press "OK" or Enter.

On Unix-based system (such as Linux and Mac OS X) a terminal window can be opened. Running "vlc" should be all that is needed to open VLC.

Where INPUT is the input file ans OUTPUT is the destination file (for example "C:\out.mp3" on Windows or "/home/username/out.mp3" on a *nix system). The above sout string is the default "Audio - MP3" profile setting accessible via the GUI. It will convert an audio input to a 128kbps CBR MP3 file (sample rate 44100Hz, 2 channels).

Basically, to stream using the GUI, open VLC, then Media [menu] -> Streaming -> (select any media to stream, then hit Stream button). At this point it asks you *how* to stream it. The most common way is via HTTP. To stream via HTTP, click on "Destinations", choose HTTP from the drop down as a "New Destination" and click add. Now if you are streaming video, you will want to stream to something like "/go.mpg." Now hit stream, and you should be able to use a different instance of VLC as a client, and listen to that stream now (ex: on the same computer it would be "Media" [menu] -> Open Network Stream -> "http://localhost:8080/go.mpg" and it should work.

First there is an input text called Source, where you'll find your media path and the its type.

If you'll click on Destination you'll see the destination of stream that could be: File, HTTP, MS-WSMP, RTSP, RTP/MPG, RTP, Audio/Video, UDP and Icecast.

You can abilitate Transcoding to transcode your video to one in the list or in a one you can specify by clicking on the proper icon.

Last you have the option of stream you'll share.

By clicking stream it will return to VLC main user interface and the playbar will scroll as the video will play.