Difference between revisions of "Documentation:IOS"

VLC for iOS is different from what you can do with VLC on desktops. In some ways, you can do more; in other ways, you can do less. VLC for iOS only does media playback. Active streaming or file / stream to file conversations are not supported for usability and performance reasons. This walk-through does only include screenshots of the iPhone interface for size reasons. However, all features are also available on iPad with virtually the same appearance.

VLC for iOS 2 is a full re-write of the original app and shares no code with it. It is under active development and evolves over time. It is strongly recommended to always use the latest version. To keep track of features added over time, here's a chart.

There are multiple ways to synchronize media files to VLC for iOS. Those may be extended in future releases. Streaming without saving files using the limited space available on iOS devices is also supported. See below.

Using iTunes, you can add and delete files to VLC for iOS. Apple provides excellent documentation for this.

If your iOS device and your Mac or PC is on the same local WiFi network, you can use WiFi Upload to add files to VLC for iOS' library. 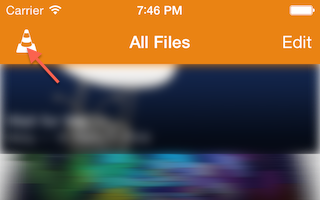 This will expose the sidebar menu. Locate the WiFi Upload menu item. Notice the empty circle indicating the server's off-state and the description "Inactive Server". Note that in earlier versions of VLC for iOS, you'll see a toggle button. 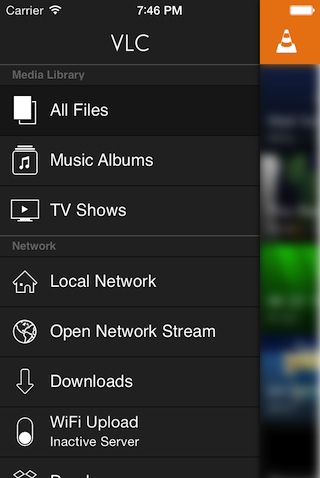 Click the item or switch the toggle. A network address will appear in the item: 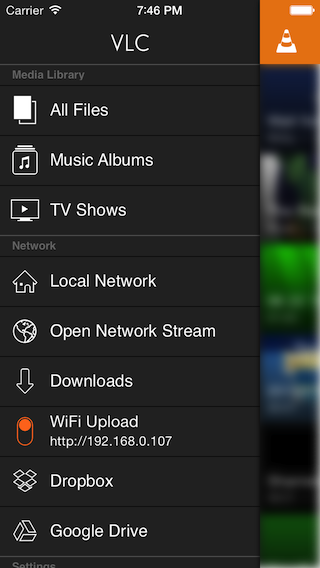 Enter the network address to your web browser on your Mac or PC on the same local network: 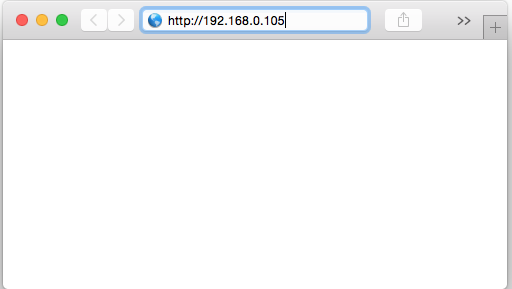 VLC for iOS' WiFi Uploading page will appear. You can drag any file stored on your Mac or PC to this window for immediate upload to your iOS device. Additionally, you can press the "Upload files" button in the top-right to expose a file selector panel in case your files are not reachable by drag and drop. VLC for iOS' WiFi Uploader supports multiple uploads at the same time and will indicate through a progress when upload is complete. Because it's VLC after all, you can start the playback of most files on your iOS device as soon as they appear so you don't need to wait until the upload is finished. VLC for iOS 2.4 adds the ability to also download files stored on device through this page. 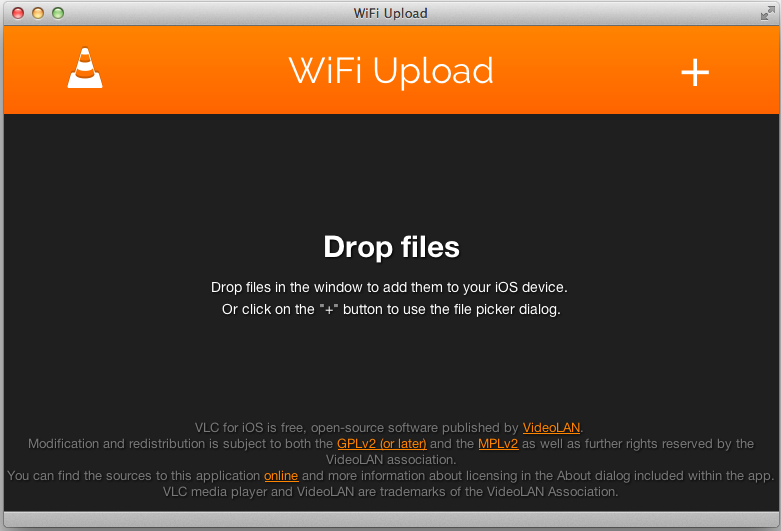 VLC for iOS natively supports Dropbox. Open the menu as described above, choose Dropbox. For the first time, a login button will appear. When clicking, you'll be redirected to the Dropbox app for login or to the web if you don't have Dropbox installed. VLC for iOS will receive read and write access to your entire Dropbox after login. However, VLC for iOS does not support any write actions (i.e. you cannot upload files from VLC for iOS to your Dropbox either), so don't worry about your file integrity. Starting in version 2.2, VLC for iOS can also stream contents from your Dropbox without downloading them first.

Similar to Dropbox, VLC for iOS natively supports Google Drive starting in version 2.2. Please check the process above for setup. Version 2.4 adds support for streaming files from Google Drive without having to download them first.

Downloads from the Web

The sidebar menu also includes an item called Downloads (or in earlier versions Download from Web Server). When selected, it will show the download queue and progress of downloads triggered through the network integration (see below) and exposes a field to enter a URL to directly download media from somewhere. Both HTTP and FTP are supported (earlier versions support HTTP only) 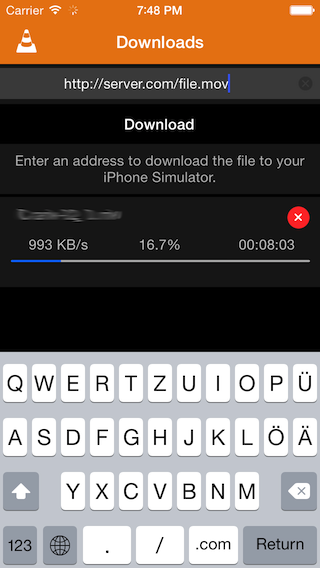 In addition to the media synchronization options described above, VLC for iOS provides a variety of options to interact with networking sources. Additionally, third-party websites and apps may include links to open streams directly in VLC for iOS.

Clicking on this item in the sidebar menu reveals a URL field to open a network streams. HTTP, FTP, MMS, MMSH, RTSP, UDP, and RTP streams are supported. Additionally, this view includes a list of your last 15 streams and an option to disable keeping the history. 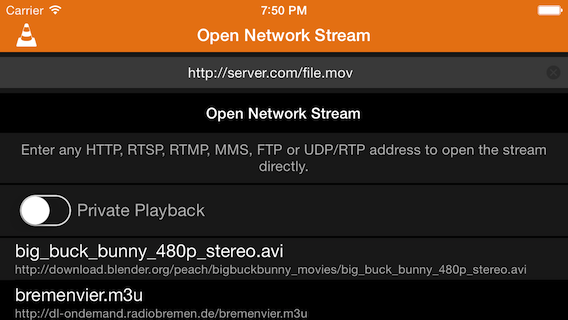 Introduced in VLC for iOS 2.1, Local Network discovers and lists servers found on your local network. At present, this includes UPNP media servers and FTP servers announced via Bonjour / Rendezvous. Further options will be made available in future releases. Depending on the server capability, you can both stream and/or download the stored contents. 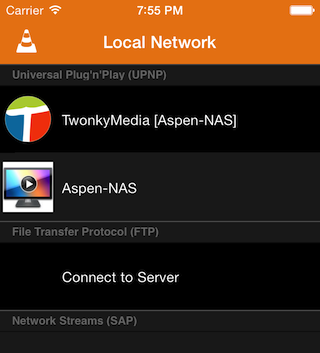 Clicking on "Connect To Server" exposes the ability to connect to FTP servers not included in the list.

The controller panel provides access to basic playback controls, a video filter panel, audio and subtitles track selection as well as playback speed. The time slider at the top of the playback screen matches the default media player behavior by allowing you to seek at the pace you want. Next to it, you will find a 2-mode time counter and a button to control aspect ratio and cropping. VLC for iOS will remember the last playback position for media stored on your iOS device. 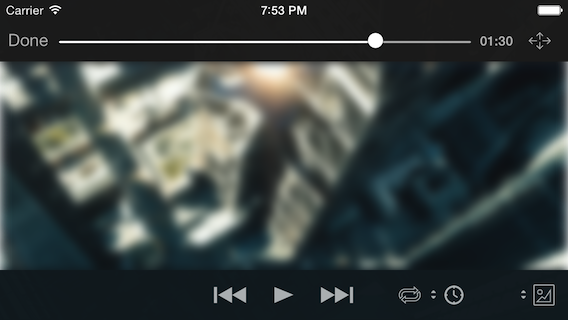 Version 2.2 of VLC for iOS introduces gesture-based playback controls in addition to the ordinary buttons.

Tap the playback screen anywhere with 2 fingers to pause or play the current media. Pinch to end the current playback session and close the video. 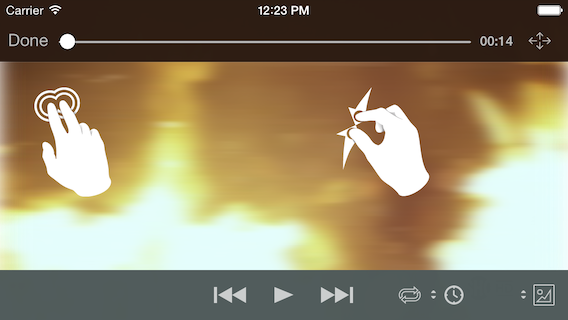 Swipe to the left and right to change the playback position. 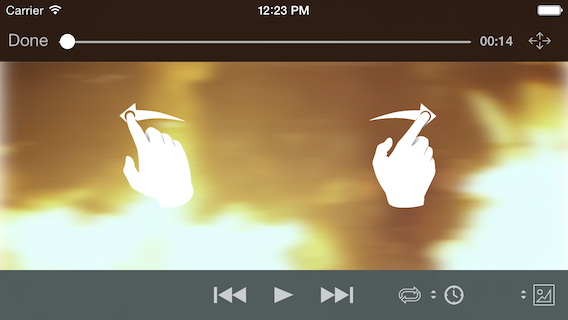 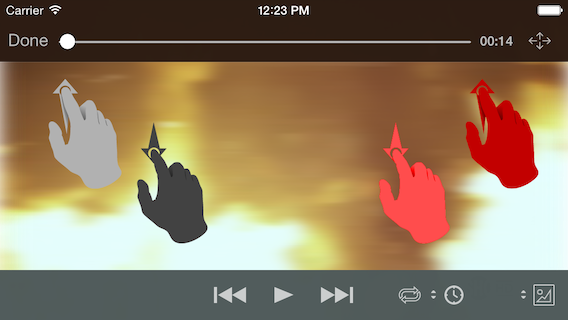 VLC for iOS does support AirPlay video and audio streaming. To enable audio streaming, just take the AirPlay switch which will automatically appear next to the volume slider as soon as your iOS device discovers an AirPlay capable playback device (an Apple TV, a multi media receiver, etc.). For video playback via AirPlay, it's slightly more difficult due to AirPlay API limitations. Apple does not allow to show an AirPlay button for video playback within an Apple if the app does not use the default media player, which VLC does not for the sake of supporting formats other than H264 / MPEG4. As a work-around, you need to use the AirPlay mirroring featuring available from the multi-tasking bar (shown when double-clicking the physical home button on your iOS device).

If your media includes subtitles or multiple audio tracks, buttons will appear in the playback controller to switch streams. VLC for iOS will remember the last chosen audio or subtitles track for future playback. If your media does not include subtitles, but you'd like to show some, give them a similar name to the media item, synchronize them and VLC for iOS will discover them automatically.

Like VLC media player on desktops, VLC for iOS allows you to modify the video’s colors in real time. Brightness will adapt your device’s physical luminance unless you play your media on an external screen, where it will fallback on a software mode. 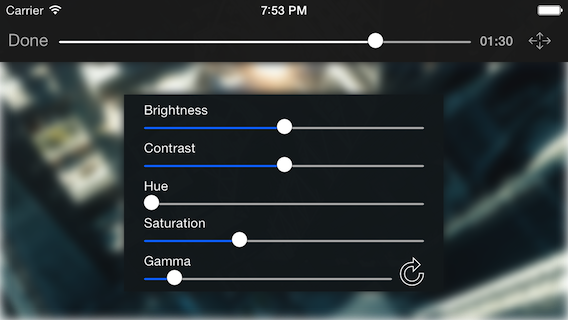 Clicking the clock button to the left of the playback controller reveals a slider with a logarithmic scale to adapt the playback speed to your needs. 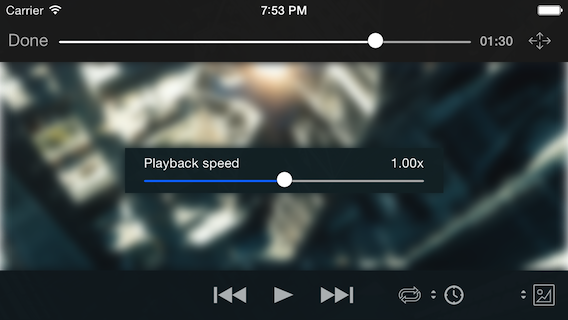 A word on audio playback

VLC for iOS 2.0.x refuses any audio-only media playback. Basic support was added in VLC for iOS 2.1 along with Music Album handling. Future updates will further improve the current feature set by introducing media artwork display, playlists, playlist operations such as shuffling or repeat, and more.

Your media collection. It offers basic information about each file, such as length, resolution, or file size. Your last playback position is visualized through an orange triangle at the bottom of the snapshot, unless it’s new or fully played. 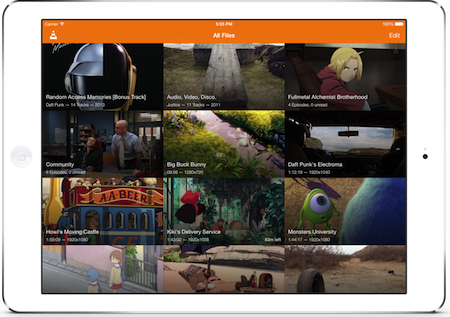 VLC for iOS 2.1 added smart handling of music albums and TV shows. Based upon meta tags and pattern matched file names, VLC for iOS will automatically detect TV shows and music albums. Switching the library mode in the sidebar menu will reveal dynamic collections for either category. "All Files" switches back to the default mode listing all files available on your iOS device within the VLC context. 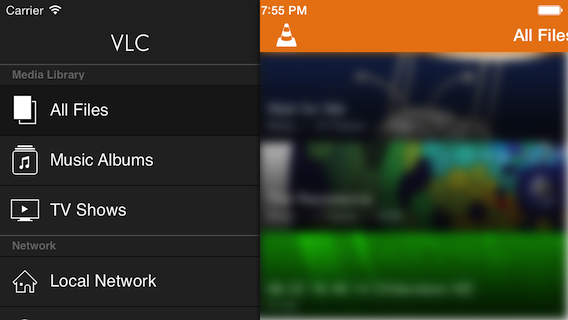 VLC for iOS 2.3 adds support for folders and custom grouping of your media content. A folder also acts as a playlist.

You can lock the app with a passcode. The current versions of VLC for iOS will always ask for it whenever the app is pushed to the foreground. Additionally, your library contents will be hidden away from the multi-tasking switcher. Starting with version 2.3, playback is stopped if passcode lock is enabled and the app is moved to the background to protect your privacy.

I forgot my passcode

If you forget your passcode, you need to delete the application and re-install it. This will reset both the settings and the media library. There is no way to recover it. However, you can backup your files using iTunes first.

I want to use another passcode

Disable passcode lock in VLC's Settings and re-enable it. It will ask you to enter a new passcode.

VLC for iOS offers a growing variety of options to customize the app suiting your purposes.

Starting with version 2.2 of VLC for iOS, we no longer support iOS 5.1. However, the last version is still available from the App Store if you jump through a few hoops.

Please note that we strongly recommend to update to iOS 6.1 or later if supported by your device for security and performance reasons.

You can't download version 2.1.3 directly on your iPad 1. You need to purchase VLC for iOS with your Mac or PC or an iOS device capable of running our latest release. Once this is done, open App Store on your iPad 1, go to the "Purchased" tab and click on the cloud symbol. App Store will tell you that the latest and greatest version isn't supported but that an older version is available instead and asks if you'd like to install it. Do it and you'll enjoy a great release of VLC for iOS. Keep in mind that VLC for iOS 2.1.3 is no longer supported by us and won't receive any updates or bug fixes.

iOS 5.0 or any earlier release was never supported by take-two of VLC for iOS. Therefore, this work-around will not work for you.