Most of VLC functions are accessible using hotkeys.

The list of the available hotkeys and their functions can be retrieved and altered in the Preferences panel of the player. In the Windows and Linux interface, Preferences are available in the "Tools" tab as the "Preferences" menu item. In the MacOS X interface, open the "VLC" menu, and select "Preferences". Select the "Hot keys" panel in the dialog.

As of version 0.9, a list of hotkeys are presented in a drop-down window. To change one, double-click its name to select it. Then, press the new key that will trigger the specified action. Modifier keys (such as Control/Command and Alt) may also be used. In the 1.x version you can also filter hotkeys with a search filter.

In earlier versions, several boxes gave the list of modifiers for the hotkey. To trigger an action using a hotkey, you need to press simultaneously the keys corresponding to the different selected modifiers as well as the key set in the dropdown.

To change the binding of a hotkey, select or deselect boxes corresponding to the different modifiers, and change the key by using the drop-down menu. Select the Save button to apply the changes. 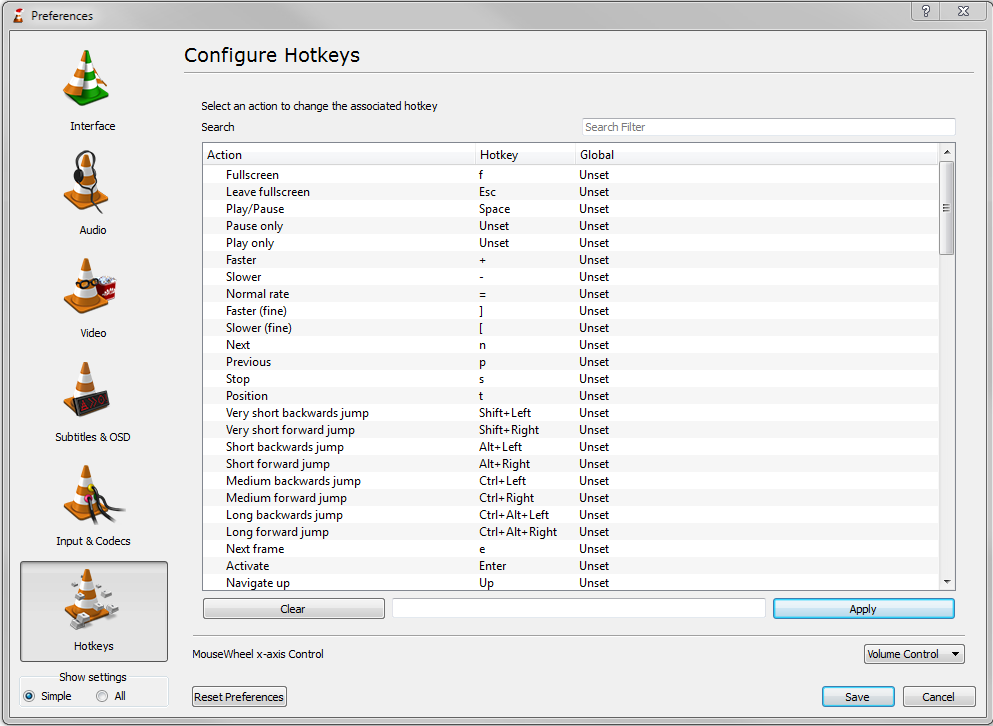 This page is part of official VLC media player Documentation (User Guide • Streaming HowTo • Hacker Guide • Modules)
Please read the Documentation Editing Guidelines before you edit the documentation
Permission is granted to copy, distribute and/or modify this document under the terms of the GNU General Public License as published by the Free Software Foundation; either version 2 of the License, or (at your option) any later version.
Retrieved from "https://wiki.videolan.org/index.php?title=Documentation:Hotkeys&oldid=59076"
Categories: